Richard Carwardine is Rhodes Professor of American History Emeritus and a Distinguished Fellow of the Rothermere American Institute at Oxford University. He served as president of Corpus Christi College at the University of Oxford from 2010 to 2016.

In July 2009, as an adviser to the Abraham Lincoln Bicentennial Commission, he convened an international conference in Oxford to examine Abraham Lincoln’s global legacy: the proceedings appeared as The Global Lincoln (Oxford University Press, 2011), co-edited with Jay Sexton. The same year, he was elected to the Order of Lincoln, the highest honor of the state of Illinois.

Carwardine is a Fellow of the British Academy, a Founding Fellow of the Learned Society of Wales, and a founding member of the Council for the Defence of British Universities. He has held visiting positions at Syracuse University (1974-75); at the University of North Carolina at Chapel Hill (1989); and as the Stewart Fellow in Religion at Princeton University (2011).

His books and many essays on American religion and politics include, most notably, Transatlantic Revivalism: Popular Evangelicalism in Britain and America 1790- 1865(Greenwood, 1978) and Evangelicals and Politics in Antebellum America (Yale, 1993). His analytical biography of Abraham Lincoln won the Lincoln Prize in 2004 and was subsequently published in the United States as Lincoln: A Life of Purpose and Power(Knopf, 2006). His most recent book, Lincoln’s Sense of Humor (Southern Illinois University Press, 2017), has won the 2018 Abraham Lincoln Institute Book Prize. He is currently working on a book for Alfred A. Knopf, New York, entitled Building a Righteous Nation: Religion in American National Construction from Washington to Lincoln.

At Washington & Jefferson College’s inaugural Symposium on Democracy, Carwardine will present a public lecture titled “The Foundation of American Democracy: 1776-1865” on Feb. 14, 2018 at 6:30 p.m. in Olin Fine Arts Center. 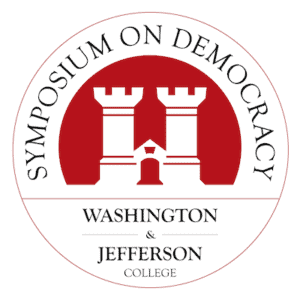 Lunch and Learn with Richard Carwardine